Scrum
If a Gamification project requires customization of iEGP Platform we use the incremental Scrum approach to quickly release new funtionalities.

Scrum is a management framework for incremental product development using one or more cross-functional, self-organizing teams of about seven people each. It provides a structure of roles, meetings, rules, and artifacts. Teams are responsible for creating and adapting their processes within this framework.Scrum uses fixed-length iterations, called Sprints, which are typically two weeks or 30 days long. Scrum teams attempt to build a potentially shippable (properly tested) product increment every iteration. 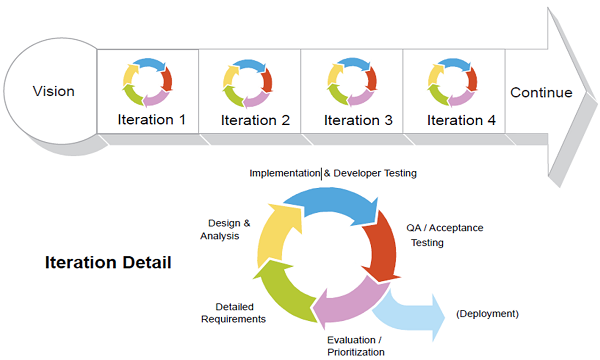 The greatest potential benefit of Scrum is for complex work involving knowledge creation and collaboration, such as new product development. Scrum is usually associated with object-oriented software development.
The Scrum framework consists of Scrum Teams and the roles, events, artifacts, and rules associated with them. Every part of the framework serves a specific purpose and is essential to the success and use of Scrum. The rules of Scrum bind together the events, roles and artifacts, governing the relationships and interactions between them although specific strategies for using the Scrum framework may vary.

The Sprint is a unit of the basis of the development in Scrum and is of fixed duration, generally from one to four weeks. Each Sprint is preceded by a planning meeting where the objectives are identified, and the times are estimated.

During a sprint it is not allowed to change the objectives, so changes are suspended until the next planning meeting, and will be considered in the next Sprint. At the end of each sprint the development team delivered a potentially full version and functioning of the product containing the advances decided in the sprint planning meeting.

During each sprint, the team creates complete portions of a product. The set of features that are used in specific sprint come from the product "backlog", which is an ordered list of requirements. The selection of which the backlog items will actually be included in the sprint (to be the goal of the sprint or "goal sprint") is carried out during the sprint planning meeting. During this meeting, the Product Owner informs the team which items of product backlog would like them to be completed (those with highest priority). The team then determines how many of them think they can complete during the next sprint, and records this data in the sprint backlog.

The sprint goal should not be changed during the sprint. The development is of fixed duration, in such a way that the sprint terms to the predetermined date; if the requirements were not completed for any reason they are excluded from the review and re-inserted in the product backlog at the discretion of the Product Owner.